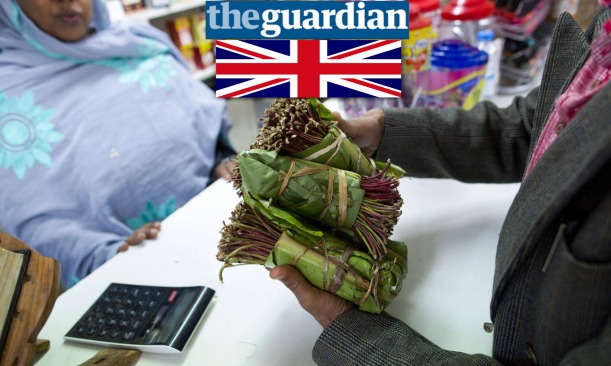 In a quiet and unassuming town tucked away in a hilly part of eastern Kenya, the British home secretary Theresa May’s name is spoken with barely concealed anger. Since her role in the ban of the town’s most valuable export, she’s become a universally vilified figure.

For more than two decades, Maua enjoyed booming business propelled by the growth and sale of khat, known locally as miraa, a popular herb whose leaves and stems are chewed for the mild high they offer.

But last year the UK, home to one of khat’s biggest markets, declared the stimulant a class C drug and banned all imports, prompting Maua’s rapid descent into economic purgatory.

Since the early 1990s, Britain has imported between 2,500 to 2,800 tonnes a year, according to the Home Affairs committee. Although in its initial findings the committee could not find a compelling health or social reason to ban khat, May’s argument – that continuing to allow trade in the UK would spawn off an illegal export corridor to other European countries where it is banned – won out in what became a controversial cultural debate.

Now that people are no longer making money from miraa, they do not have money to buy food

Now, a year after the legislation was signed, residents in Maua have been hit hard by a shrinking local economy that has left many facing poverty.

Edward Muruu is one of the earliest pioneers of the khat export trade. A retired headmaster at a local primary school, he says he has experienced unprecedented losses since the ban came into effect.

“I used to ferry miraa (khat) from Maua to Nairobi four times a week using 27 Toyota Hilux trucks, where it was repackaged for export. I used to make around £2,100 a month. Now I am lucky if I bring in £250 per month,” he says.

With the European market gone, the only place left for Muruu to sell his stimulant is Somalia, where consumers now dictate how much they pay – and it’s not much.

“The other issue with the Somali market is that the only people who can transport miraa to Mogadishu are Kenyan Somalis, meaning that the rest of us drivers have been put out of work,” says a former worker of Muruu’s, who only identified himself as Kanda.

According to Kanda, if non-Somali drivers attempt the trip they are attacked along the journey. For a town of its size and location, Maua has a disproportionately large number of residents of Somali heritage, most of whom are involved in the khat trade as middlemen. They are also big consumers themselves.

‘Miraa was the heartbeat of this town’
The effects of the London ban have reached everybody in the khat micro-economy, from the big name traders like Muraa to the small fish who depend on the trade for their survival.

Although Muraa has made investments that have cushioned him against the blows of a deeply depleted income, those at the lower end of the food chain have not been so lucky.

Miriti Ngozi, chairman of the Miraa Traders Association, says that many farmers and traders are no longer able to pay school fees or even buy enough food for their families.

The miraa trade was the heartbeat of this town; it drove everything else
Lawrence Kobia
“You have to understand that in this region, subsistence farming has long been overshadowed by the more prestigious miraa farming. Now that people are no longer making money from miraa, they do not have money to buy food and many families are sleeping hungry,” he says.

Yet many remain reluctant to uproot their khat crops and plant maize instead, holding on to the hope that their fortunes might one day return.

Pius Mbiti, a trader in his early 30s, is a qualified vet but says that he makes most of his income from picking and selling the stimulant.

“On a good day I used to make up to £12 which, when supplemented with earnings from my vet practice, was enough to take care of my family. But since the ban I am lucky if I make even £2 pounds,” he says.

He cannot rely on animal medicine any more either because farmers no longer have the money to pay for his services.

This narrative is familiar across the town, with the common refrain being that shutting down miraa imports to London is killing businesses indirectly linked to the herb.

“The miraa trade was the heartbeat of this town; it drove everything else. With revenue from miraa so drastically low, people no longer have the money to buy things,” says Lawrence Kobia, who owns a bookshop. He says that his sales have plummeted by more than 40% since last year.

Seizures
In its submissions to parliament, the Home Office committee warned that banning khat would result in the formation of a black market – as seen in the United States and other European countries including Norway and Holland.

This ban on khat is another idiotic salvo in the UK’s disastrous war on drugs
Ian Birrell
Ian Birrell Read more
Although initially khat sold for between £3 and £4 a kilogram in Britain, the committee reported that if it was banned the price could increase to £318, similar to its price in the US.

Their predictions turned out to be true: there has been a proliferation of the stimulant in London since the ban. While the border police have no statistics on seizures, the London Metropolitan police says it has handled a number of khat-related offences.

A spokesperson said that in the first six months after the ban came into effect, a total of 68 warnings and 14 penalty notices were issued. In addition, 36 people were arrested for possession of the herb, four of whom were later charged.

In the meantime, the Kenyan government is trying hard to get the ban lifted, with president Uhuru Kenyatta even promising the farmers in Maua as recently as February that he will petition to have the market reopened for them.

The farmers, however, see this as a cheap political move to whip up support, complaining that no tangible rewards have come from promises made by politicians regarding the matter in the past.

But the squabbling over high-level politics in Kenya and the workings of the parliament in Britain are meaningless to the miraa farmer in Maua, whose only worry is where the next meal will come from.